Welcome to a new series of posts on here about the subjectof weathering.  Anyone who has done theirown weathering can probably relate to my story of how it began, why I startedand what I have done, I am hoping that by telling my story over the past year Ican help some people thinking of starting to have a crack at it or those whohave started to keep at it. I will in future posts look at hints & tips,how to weather a model and answer any questions you might have. Before we beginwith my story

First of all lets take a look at how the railways were inthe 1950’s and 60’s (the era the Weeklyn Hill Model depicts). Cleaners were arare commodity and those that were around would focus on the top link expressengines rather than freight or tank engines, even then not all the top linkwere clean – my Dad grew up by the East Coast Main Line just south of Durhamand the first time he saw a green A4 he commented “they look nice, they shouldpaint them all like that” totally unaware that under the soot and muck they wereall green. Steam engines are notoriously filthy machines, they chuck out soot,smoke, ash, grease and oil which when combined create some wonderful murkycolours. 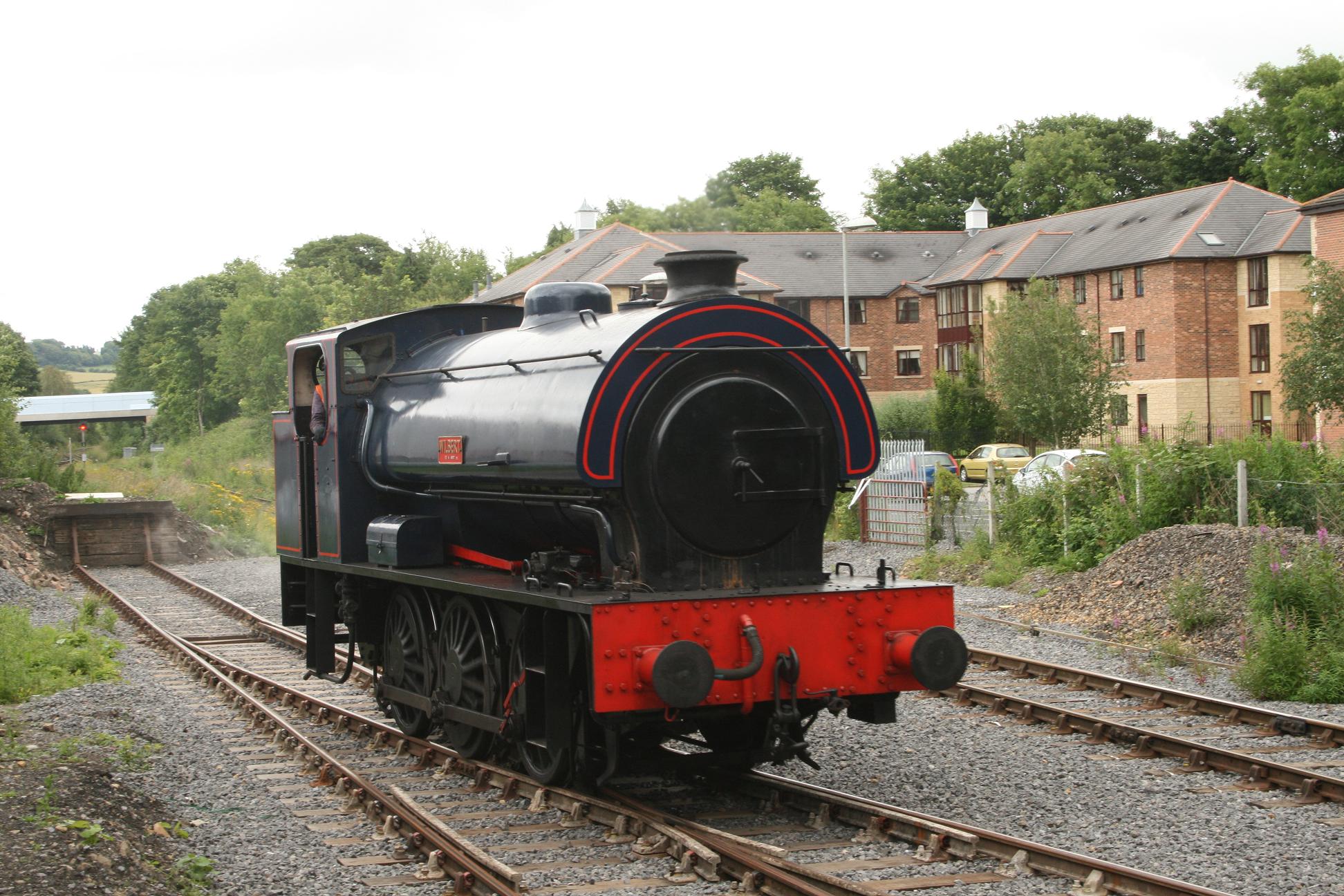 Above. RSH Austerity Wilbert runs aroundits train at Bishop Auckland West on the Weardale Railway, at first glance thisloco as you would expect from a now preserved loco appears to be clean… 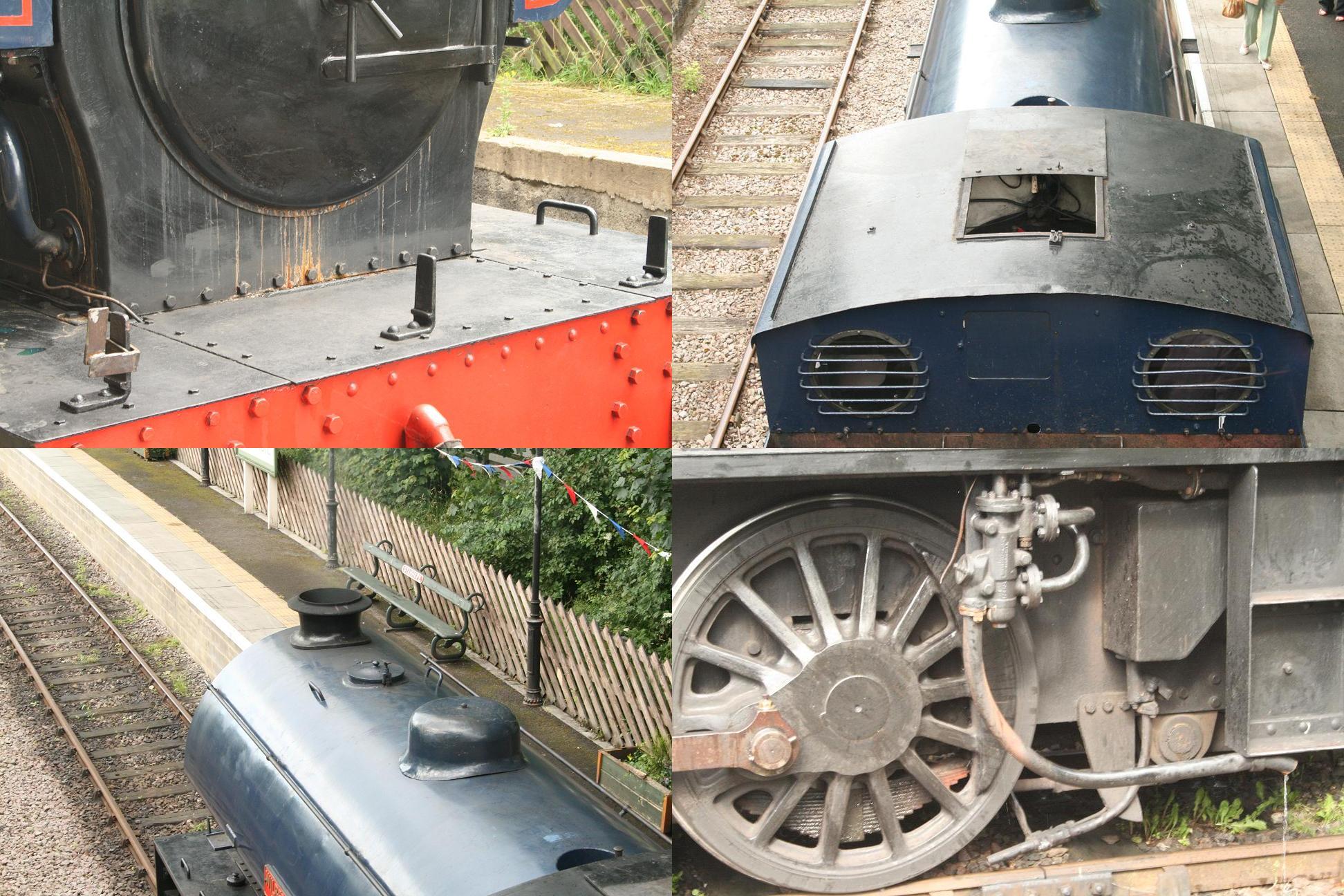 Above. But appearances can be deceptive.Ash and water has left some streaking on the front end and in a small area causedthe paint below the smoke box door to peel away and rust to be exposed. The cabroof and boiler top is sooty and dirty – cleaners would not often go this high.The springs are rusty, the frames have some dirt and the cab steps have exposedmetal. This just goes to show that no engine should be totally spotless, unlessmodelled just out the works and not even had a fire lit yet or perhaps about topull the Royal Train.

Model railway engines on the other hand are often portrayedas clean; their plastic factory finish is given away by a clean look which canspoil an otherwise excellent model, a few layers of suitable shades of paintcan disguise this and create a better looking model than before. Now we havelooked at the why, let us look at my how…

One year ago I took the plunge and started to weather itemsof engines, rolling stock and buildings for Weeklyn Hill, too many commentsabout the coaling tower and how clean it was started to water a seed that I hadalways had an interest in. To me a model railway at an exhibition needs to bemore than engines straight out the box onto a piece of track, you need to makethem your own.

I had renumbered a few locos to suit the layout already sothis was a start but even then there was something lacking and when reading anissue of Hornby Magazine in about November 2011 there was an article by agentleman called Tim Shackleton (you will see this name throughout these blogs)on the basics of weathering and I was hooked instantly. I decided my new yearsresolution would be to learn how to weather, I was already a subscriber toHornby Magazine so getting the articles was not a problem (they are stillpublishing them now so there is plenty of material for me here), I also boughtTim’s book Aspectsof Modelling: Weathering Locomotives and read it cover to cover severaltimes and his DVDwhich again I watched over and over. This was all well and good but by now itwas March and I had not done anything apart from a few wagons with a cheapairbrush that was not the right tool for the job.

I decided time for reading only was over and I would notlearn a thing if I did not pick up some new tools and get practicing. In hisbook, Tim recommends an Iwata airbrush which he uses, all well and good butthis will set you back over £200 – not ideal for a beginner. He does also sayif you want something a bit more low key to tray an AB-180 for more in theregion of £50. I however managed to pick up an AB-130, which is very similar,for £20 with a free hose to connect to a compressor.

This now gave me the equipment to get started but first ofall I wanted to try the airbrush out to get used to the feel and how it worked.Two old Lima locos that no longer worked gave up their nice paint for a coat ofwhite as testers. I tried general over spraying and trying to get up close tosmaller detail to see how it worked and quite quickly felt that I could do thejob required with this tool. However I felt that next stage was to do a properjob on something a bit simpler, so I rescued some old Thomas coaches and wagonsfrom storage in the attic and repainted their new yellow roofs to bright white(just as they were 20-odd years ago). At least if nothing else they weresomething I could call progress even if I had unweathered them so to speak.

Above. The first wagons I ever weathered,after retouching. Originally I used Phoenix Precision paints – frame dirt, roofdirt, oil leakages and light and heavy rust to weather the wagons. But I did not like the finish (apart from the leaking oil from the filler caps) so I wentover it with a mixture Humbrol paints which seems to be much better.

The success with these lead me to re-do the original wagonsI had weathered for Weeklyn Hill with a few more thrown in off the home layoutfor good measure. I think doing them on mass works as it saves cleaning thebrush as much but you should still try to make them all slightly different.

By now we were into April and the layout was approaching itssecond booking of the year with no weathering to show off yet. I decided tobite the bullet and go for the biggest but probably easiest to weatherprojects, namely the coaling tower and ash plant. For these all I did was givethem a coat of brown/black mix and gently streak it downwards with a brushsoaked in white spirit. The work done at least allowed the 2 structures to bemore authentic in the shed.

House moves and wedding preparations then got in the way fora month or 2 but in August I was back out with the tools and tackled 2 steamengines, an LNER O4 2-8-0 and a Midland 3F 0-6-0. I also did the bottom half ofan A3 and a Jubilee whilst the airbrush was out. Both the first 2 locosreceived a heavy coast of grime that would suit any freight loco in the late50’s early 60’s and made their debut at Shildon show where they received a fewcompliments.

Above. The first 2 weathered steam locosin the fleet. GCR O4 63635 and Midland 3F 43762 show off their true colours,compare these to the shade in the photos of any pic of the models as sold andyou will see the difference a coat of grime can make. Humbrol paints and DCCConcepts powders did the job here.

Now after finally breaking cover on Face book and Twitter I decided to write some blog posts about my experiences. This is the end of partone, but join me soon for part 2 where I will look at equipment and materials.

Oops, you forgot something.

The words you entered did not match the given text. Please try again.