We are currently in the middle of a quiet spell in the layout booking season (between late Jan and mid-May we have no shows) so this has given us time to tweak a few little problems that occured at the last show. The main casualty was 2 point stopped firing when instructed. Thankfully spare ports on the Lenz deoders allowed a quick movement of wires which saw the points back in use. Untill we can cure this 100% we have made the changing of wires easier on the decoder ports to reduce down time at shows.

The only other changes now are mainly scenic, namely finishing off some of the figures that need painting.

However the main news on the shed front is the new Bachmann 2012 release list. Once again Bachmann have rewarded us with more locos suitable for Leeds (see http://leedsweeklynhill.webs.com/apps/blog/show/8595941-show-rosters-home-or-away-team- for previous comments on the matter) with a Midland 4F and LNER J11 "Pom Pom". The 4F's really are one of the typical locos needed at Leeds so it is fair to see I am looking for someone who can supply me with a pallet's worth of these! Whilst some J11's were stationed at Copley HIll so they would have appeared at Weeklyn Hill.

Couple that with the return of the WD 2-8-0 and the Ivatt 2MT 2-6-2T both now fitted with a decoder socket and Leeds Weeklyn Hill will be supporting Bachmann well in the future. Suppose it is fair to say that praise given to the manufacturers will bring rewards, do not slag them off as you never know what that might do!

Sorry it has taken a long time to upload these but hopefully they are worth the wait as here are the first views of the steam shed board in its lighted condition. 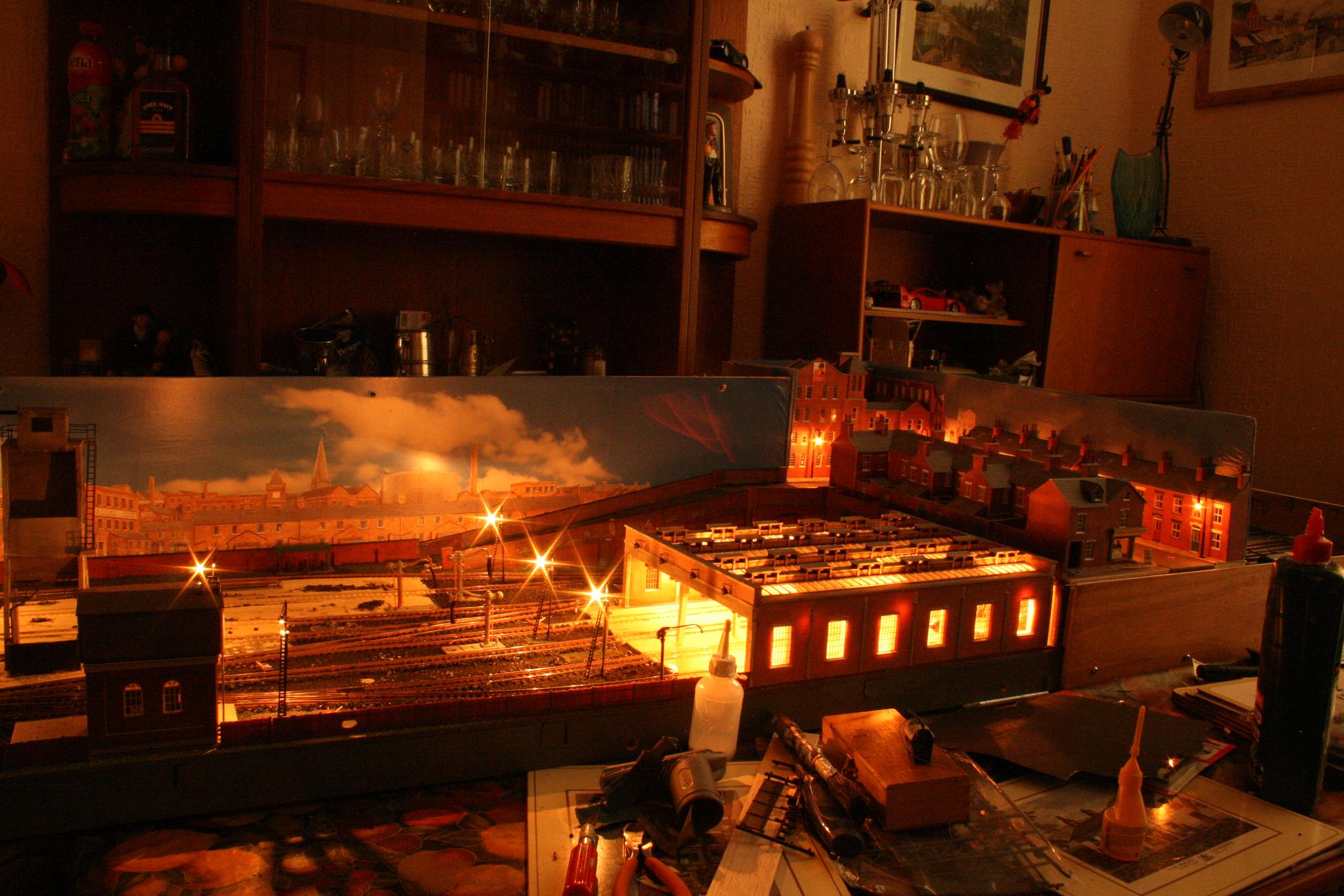 An overall view of the shed with shed, yard and street lights all light up. The shed is lit with Skaledale lighting (I am sorting out the guide as to how i did it at the moment). The yard lights are once again 12volts DC lights whilst the street lights are Viessmann lights.

Also to be seen are some of the new water cranes, this time we have 1 BR version to join the 4 Midland versions on site - I am sure some shed must have had some water cranes replaced whilst still keeping other older versions in use. The ramp that leads down from Brewery Lane that used to go nowhere now leads into the shed as a workers entrance whilst the previous hole in the fence has moved up the panel and is now bigger thus allowing kids a better chance of sneaking in undetected. 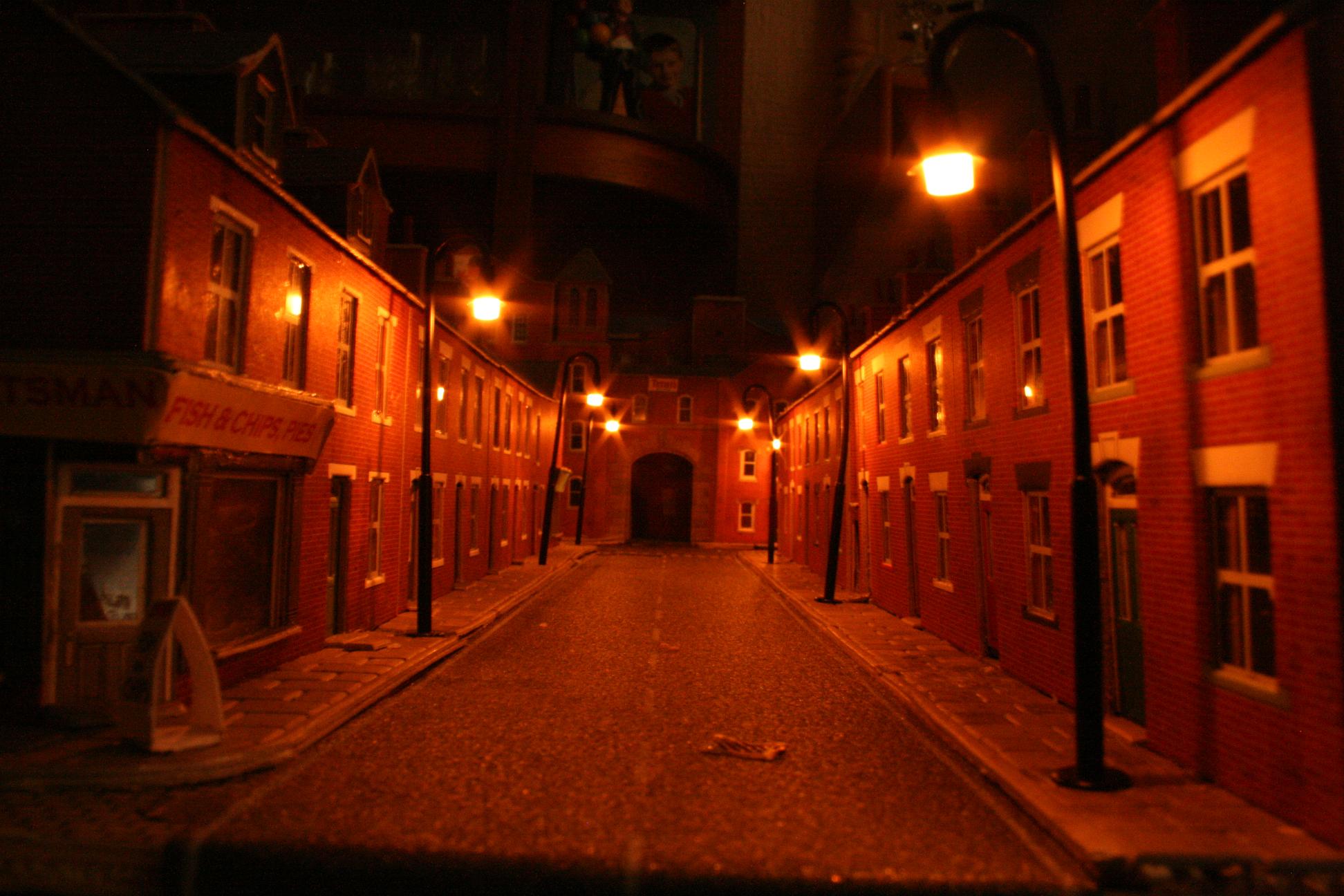 A view down Brewery Lane at night, must be late as there is not a soul around and all the house lights are off. Since this shot was taken we have purchased some zebra crossing beacons from Layouts4u which will be fitted on the crossing at the far end thus adding another source or lights to the scene. 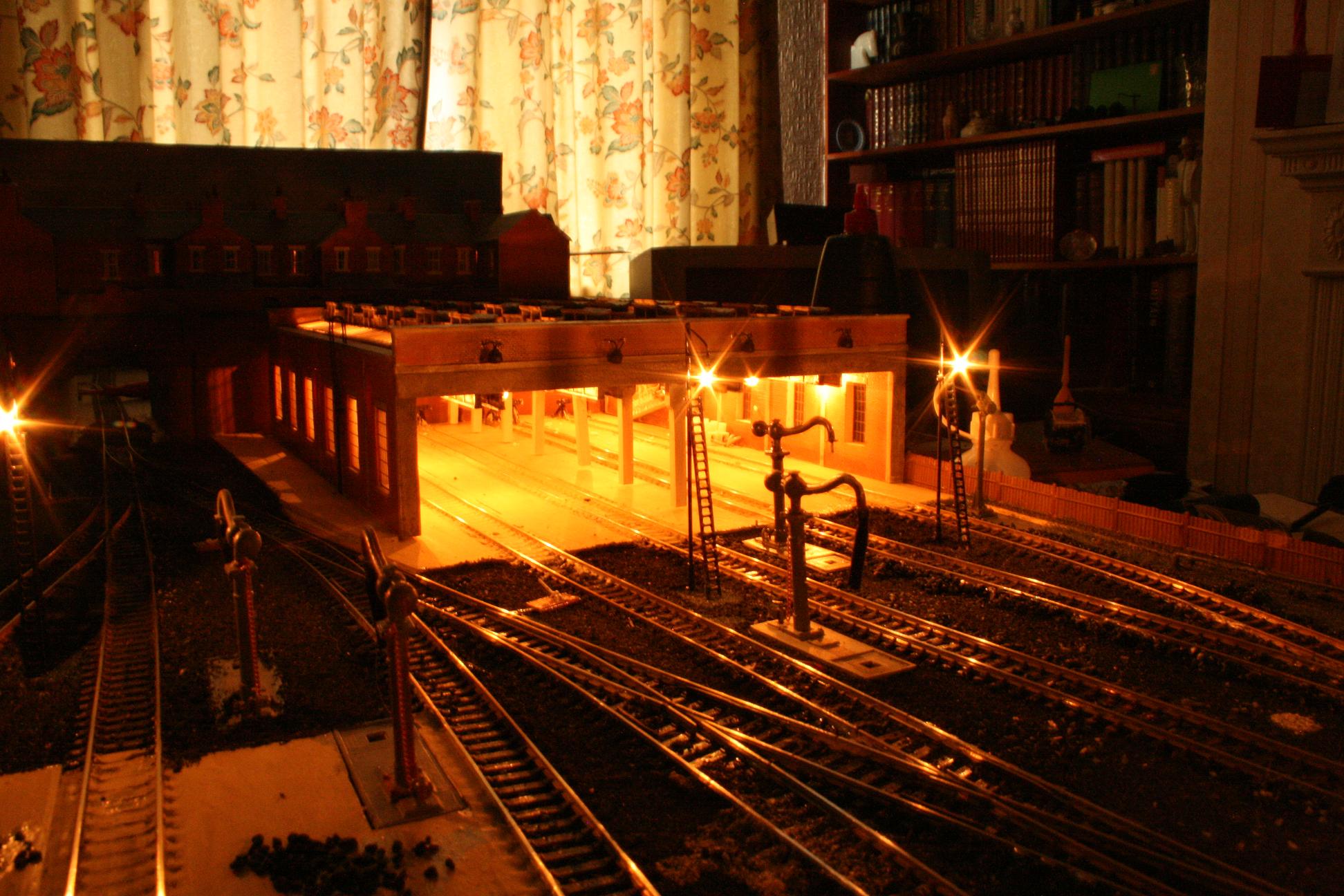 A view from across the yard looking towards the public viewpoint, as can be seen we have added point levers next to the points to improve on the detail.

Now we move onto the diesel shed, this shot shows the latest overall progress with the board, ballasting is done with the excellent Knightwing tanks and fuel delivery point in position on the fuel road 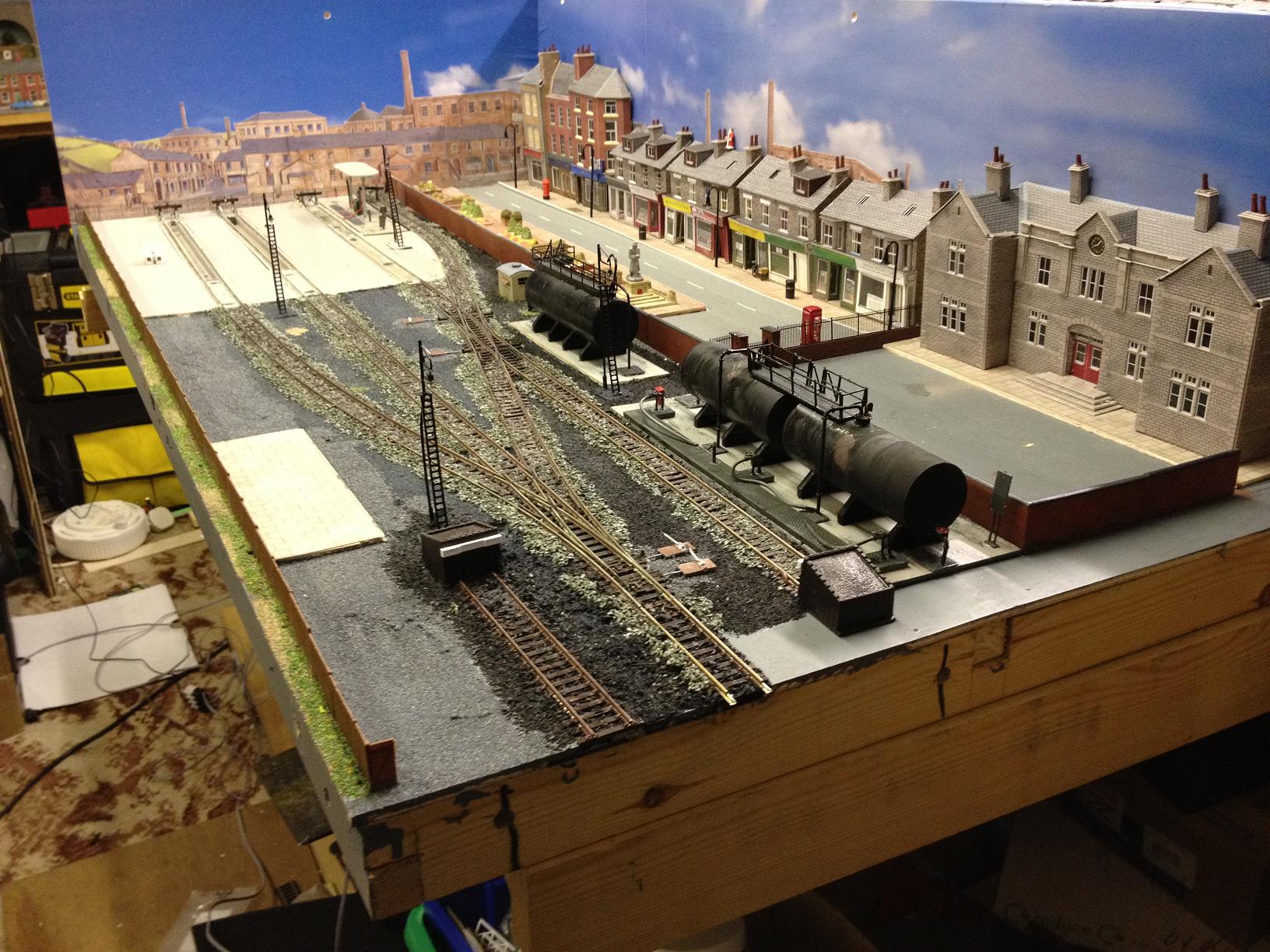 A better view of the fuel tanks with the school behind, the school is a Metcalfe station made into a half relief building to match the rest of the street. The yard will be covered with a sheet of tarmac style paper with a football pitch and hopscotch patch painted on. The school is going to feature cameo's based on Greybridge School from BBC's Ripping Yarns so look out for a bear wrestling kids and the hopping contest winner. 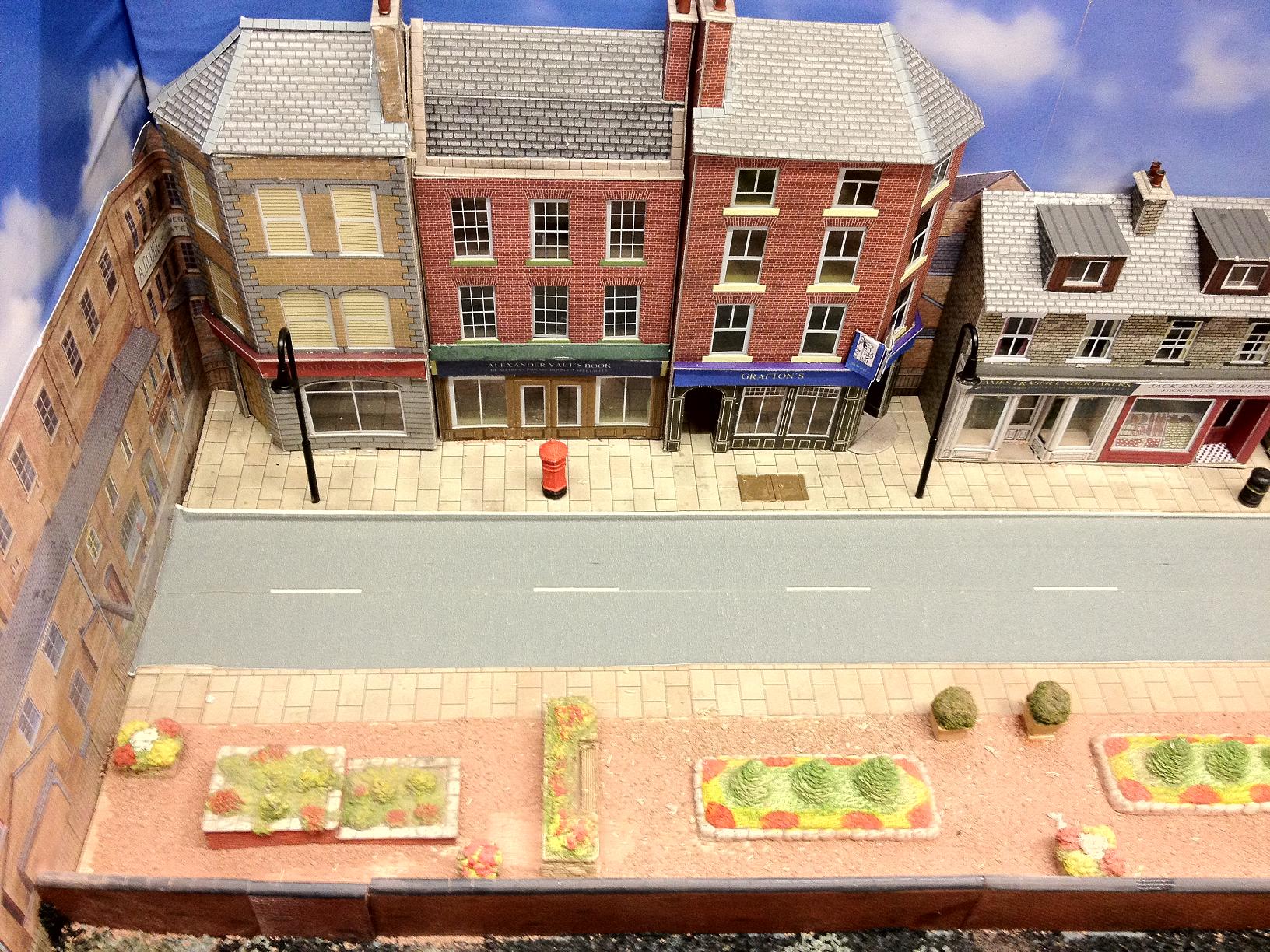 The other end of the street scene, as with Brewery Lane the lights are Veissmann. To add some colour we have fitted Harburn Hobbies plant features to a small park between the road (Noch Roadways) and the shed. 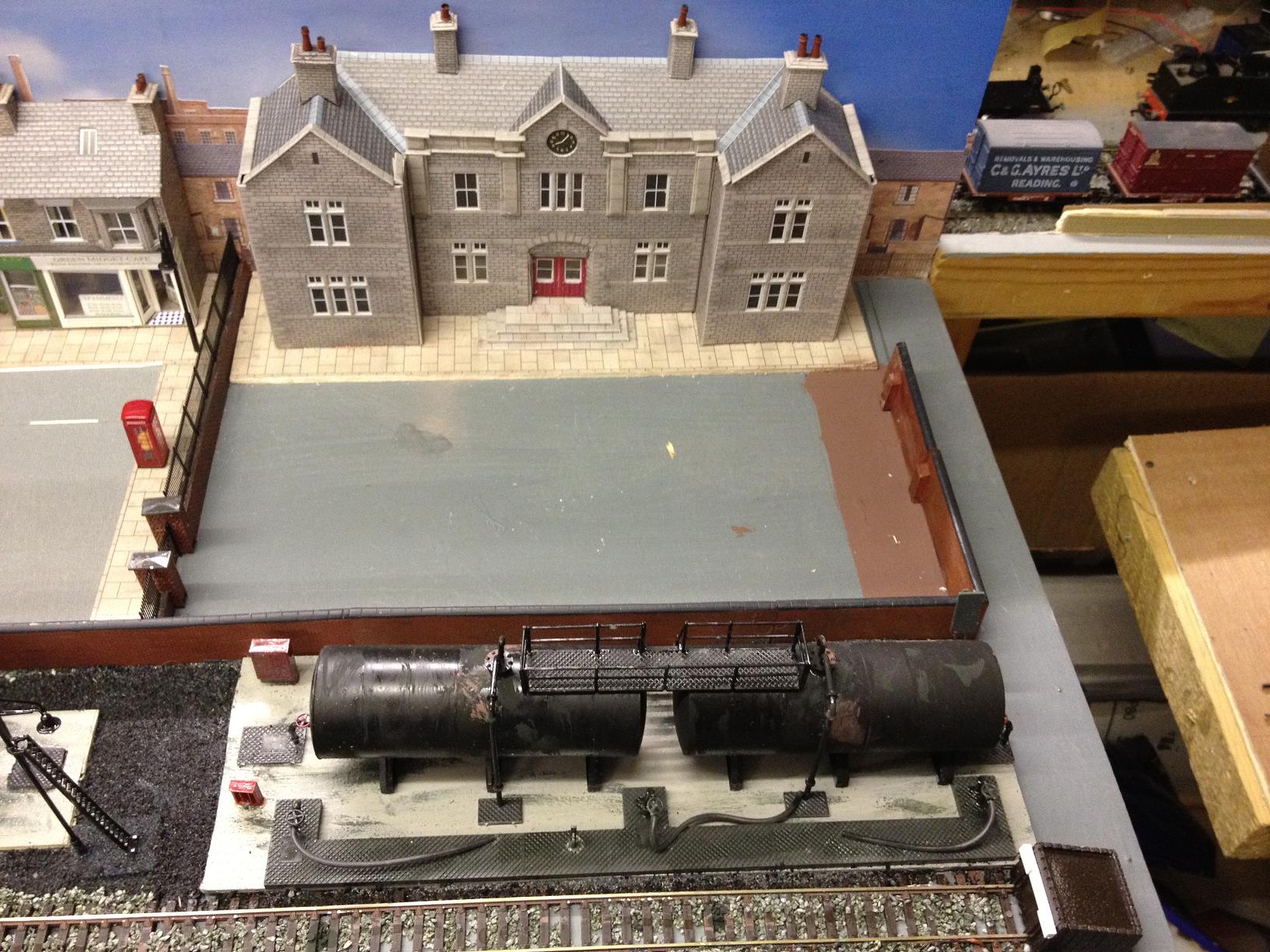 Back to the middle of the board, this shows to good effect the excellent Knightwing fuel tanks, behind can be seen the new War Memorial (this is also Harburn) which looks a lot better than the old Hornby version we had. We now have a bike outside Arkwright's so watch out for Granville coming soon. 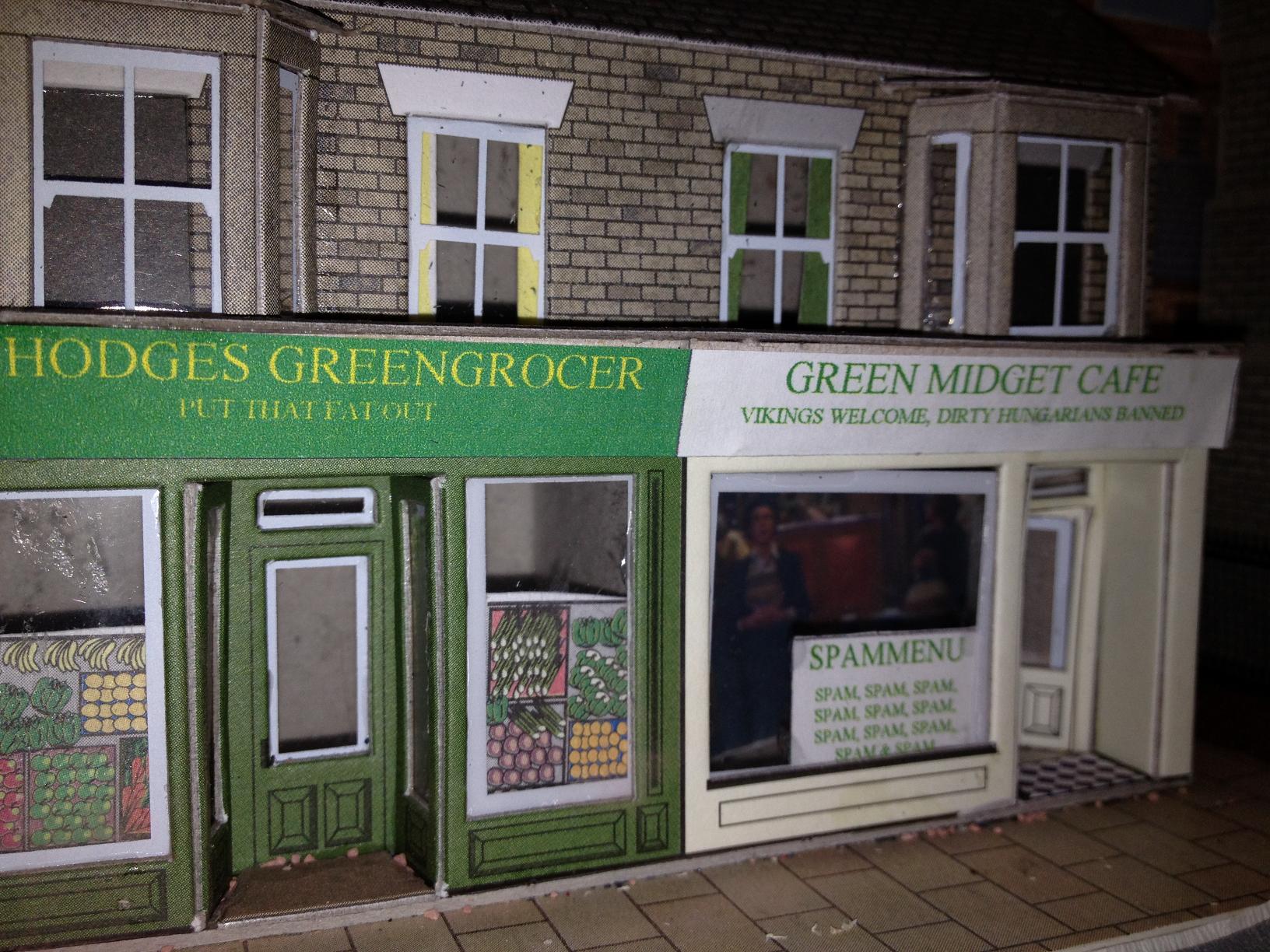 The new length of street brought new shops and with it more comedy roots explored. We now have Jack Jones the Butchers, Hodges the Greengrocers, James Fraser the Undertakers (all Dad's Army) and Green Midget Cafe (Monty Python Spam Sketch). As there was no backdrop in the Metcalfe kits we liked we took matters into our own hands. Just visible inside the cafe is a screenshot of the actual sketch - although the public will never see it it is nice for us to know it is there. 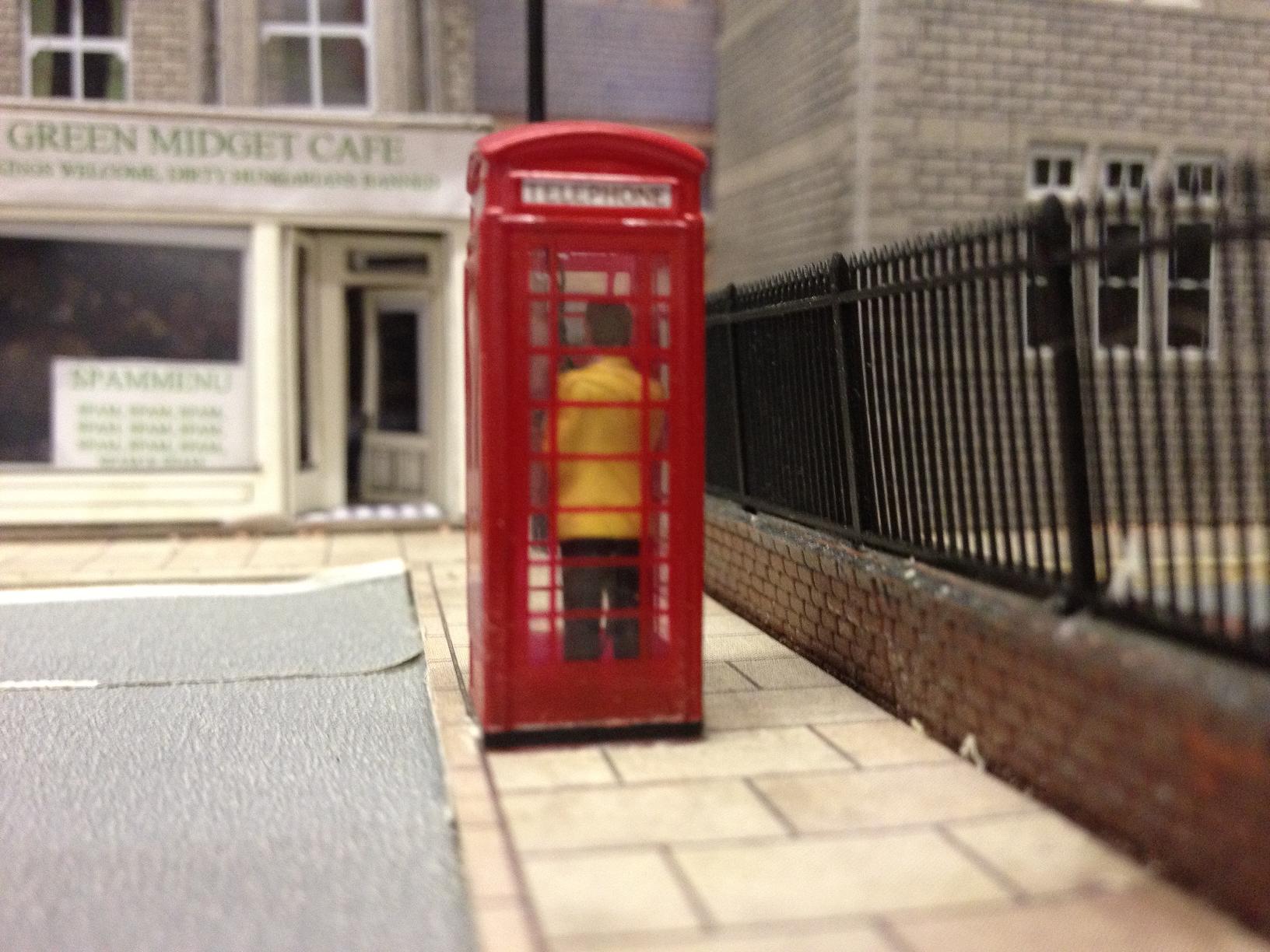 Another of the new features is a phone box, this is from Layouts4u which has a working light inside. The figure was a suggested addition by them to hid the wires to the top of the box.

Finally, the layout has now been moved to the attic for the Xmas period and given the fact that the only jobs left to do are minor jobs such as painting of figures there will not be any real updates on this thread now until the layout has been assembled in its entirety (for the first time since it has been "Finished") at Bishop Auckland Scots Show on the 20th January. Therefore I would like to thank you all for your support over the last year - it has been a pleasure to show the layout off to so many people and we are looking forward to going back out on the road and meeting more of you in 2012.

Finally I wish you all a merry Christmas and a Happy new year and hope that the jolly red suited man brings you all the model railway products you want - in fact he is delivering new goodies to Leeds right now. 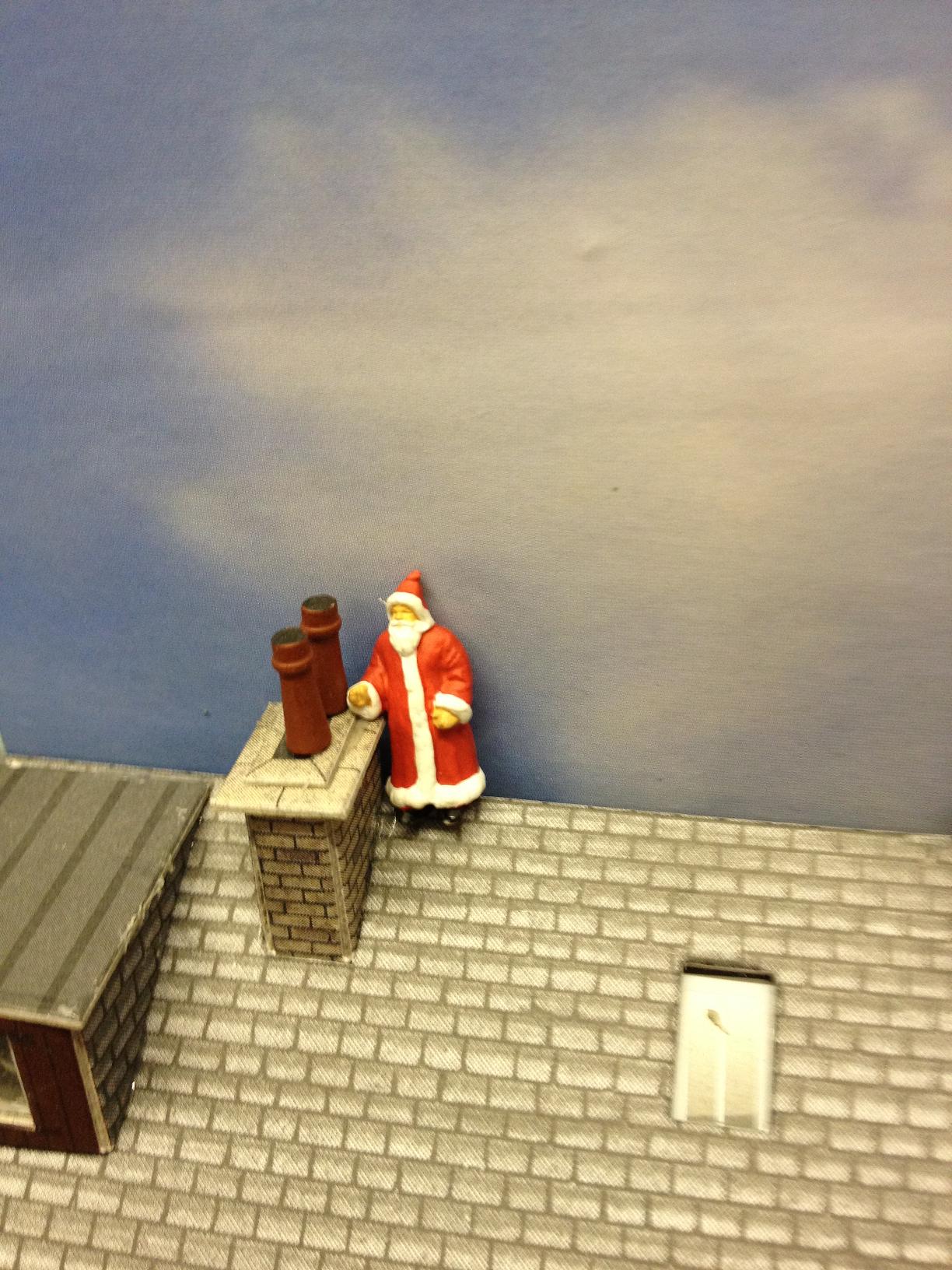